A Short History of The Chotanagpur Mission 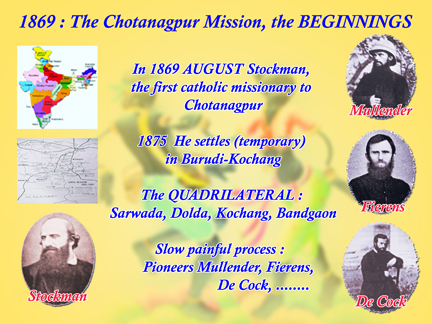 The origin of the Chotanagpur mission dates back to July 1869 when Fr. Stockman came to Chaibasa from Calcutta where ten years earlier in 1859 the first two Belgian and one English Jesuit missionaries had begun the Bengal Mission. In 1875, he moved into the Chotanagpur plateau especially at Burudi–Kochang, the very first mission station. More missionaries came and later four mission stations (the “quadrilateral”) were established in the area inhabited mainly by the Munda tribals (Adivasis). It was a period of hard labour of direct evangelisation with however little success in terms of response from the people. The situation of the tribal population at that time of history was pathetic. Many tribals lost their ancestral land and were oppressed by both landlords and tax-collectors. It was a crisis like situation - a time of transition. It was a time in which messianic expectations, hope for a Liberator, were high. Some tribals took to armed struggle which was brutally suppressed and others took to religious revival movements; while many migrated to the tea gardens in Assam. The English colonisers did not understand the tribal culture and customs and their harmonious community system. Outsiders, thus, exploited them limitlessly. 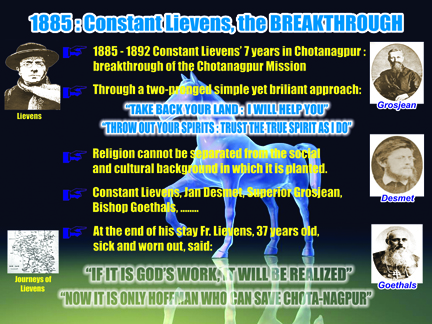 Fr Constant Lievens appeared on the scene in 1985. He studied the plight of the tribals and realised the unprecedented land alienation and the helplessness of their religion to give the right answers. He promised a two-fold liberation: freedom from without by getting their land back, and the freedom from within by the removal of superstitious beliefs. Inspired by a deep love for the poor and total commitment to their welfare, he found new ways of bringing the Gospel and freedom to the tribals. It was a real spirit of creativity and love that led him to discover the right approach to work among the Adivasis then. Fr. Lievens told the people, “I have come here, among you, for your eternal happiness. But in this life too, I can make you happy. Confide your difficulties to me. I shall help you as much as the law allows.”

This new method – legal help, solidarity with the afflicted, offering inner freedom – generated deep trust among the tribals and they poured in like a flood. They got their land restored and their fear of evil spirits, landlords and the police was removed. It was all due to Fr. Lievens and his generous Jesuit companions. Christianity in Chotanagpur emerged as a mass movement. Village after village got converted. People themselves came to the Jesuits before the Jesuits could set foot in the villages. Fr. Sylvain Grosjean, the Mission Superior, backed Lievens to the full against the external and internal detractors. Fr. Lievens is rightly called “The Apostle of Chotanagpur” and, as the title of a recent biography written by Fr. Agapit Tirkey SJ is aptly called, “Lievens, the Liberator of a People”. His poor health forced him to return to Belgium in 1892, a year before his death in 1893. 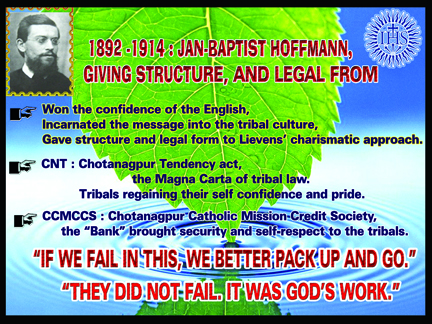 After the departure of Lievens there was, for a short while, a setback from within: human fear got the better of faith and trust in God. But soon the work for justice continued and it got further consolidated. Some strong pillars and a firm structure were built. Fr. Hoffmann won the confidence of the British officials and made them understand and respect the tribal way of life. He truly incarnated the Gospel message into the tribal culture. He gave legal form to Fr Lievens’ charismatic approach. He was the pioneer who established the Catholic Cooperative Credit Society which helped the people to get out of the clutches of the moneylenders. He wrote almost single-handedly the Chotanagpur Tenancy Act, 1908 [CNT] by which tribal land cannot be sold legally to non-tribals. These two pillars stand upright till today and continue to be a tremendous boon for the tribals. The beginnings were marked by creativity, option for the poor and concern for the spiritual need. These went hand in hand.

‘Fire must burn’ had been the inspiration of Father Lievens and indeed it continued to burn. Some great workers, builders, evangelisers, missionaries, Fathers, Brothers, Sisters, Catechists and other lay collaborators were hugely responsible for bringing about a consolidation of the beginning and for a steady expansion. Cardon, De Grijse, Van Robays, Van der Linden, and many others spread out into Barway, Biru, Gangpur and Udaipur, laying the foundations of future flourishing mission territories and local churches. They instilled new confidence and self-respect among the tribal people who found a new way and a new meaning within their traditional, social and cultural set up. Silent heroes indeed!

During this period, a massive expansion of Primary and Middle School Education, spearheaded by the future Bishops Van Hoeck and Oscar Sevrin, brought about a deepening and interiorisation. This turned a limited Christian group into a progressive Tribal Community. Predominantly Belgian/Flemish Jesuit missionaries hand in hand with their Indian Jesuit tribal companions were instrumental for the rise of a whole people to a different level. One result of this process was a flood of priestly and religious vocations. A symbolic crowning point of this intense period was the start of St Xavier’s University College in Ranchi in 1944, another act of trust and courage which has borne immense fruit since then. 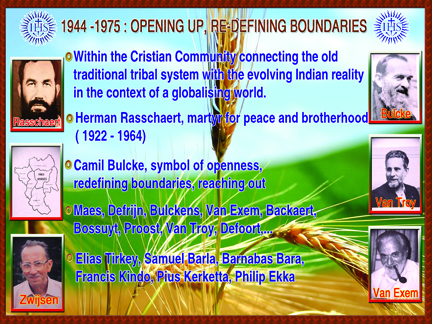 This too was a challenging time: connecting within the Christian Community the old traditional tribal system with the evolving Indian reality and that again in the context of an emerging globalising world. It needed a Camil Bulcke who redefined boundaries and reached out beyond the tribal set-up. Proost, Van Troy, the future bishops Pius Kerketta and Philip Ekka and Frs. Samuel Barla, Victor Tucker, and many other schoolmen built on the past and laid the foundation of a solid educational network. It needed a set of fervent missionaries in the Madhya Pradesh part of the Chotanagpur Mission, freed since 1947 of the shackles of the raj-system. It was in 1956 that this Chotanagpur Mission became independent from the Calcutta Mission and became a Jesuit Province. The process of separation had started in 1935. In due time, new Jesuit administrative units of Hazaribagh, Jamshedpur and Madhya Pradesh were created. Later, they also became the Jamshedpur, Rourkela, Kunkuri, Ambikapur, Hazaribagh dioceses.

The martyrdom of Fr. Hermon Rasschaert on 24th March 1964 is considered the symbol of total commitment. He sacrificed his life in an attempt to save the lives of a group of Muslim families of Gerda village and became a martyr of Peace and brotherhood. The people of Kutungia, where Father Rasschaert was their pastor at the time of his death, remembered this event this year with a beautiful two-day long celebration. To mark the occasion, a public function was arranged in Ranchi by the India Desk and the Sadbhavna Manch (Inter-religious Forum for Harmony). A group of prominent personalities expressed their admiration for the Martyr of Peace, Justice and Harmony. Fr. Louis Francken wrote a short inspiring biography: “Fr. Herman Rasschaert S.J. Man of God, Man of Humanity.” Herman was a person of total commitment and was ever ready to take risks in the line of the early pioneers.

This period in the Mission saw the emergence of a well-evolved local church and religious leadership at all levels. Mere 100 years of toils brought to fruition a fully evolved indigenous church. It also saw the emergence of highly educated tribals rising in different levels of the educational and administrative field. It was also a time of a concerted effort to bring together all tribals on the basis of their common cultural and historical background in the face of anti-Christian forces who tried to divide the tribal community for their own purposes. It saw a spate of secondary education and new Jesuit social ventures.

The reaction of many a visitor from abroad in this regard is symptomatic: “We didn’t know what to expect when coming to visit the Ranchi Mission. We never dared to expect what we really saw: solid institutions at all levels, a flourishing local church, deep faith, a vibrant community. The word ‘tribal’ got a new meaning for us. And that too in a relatively short time! How did you do it?” An apt answer to this may be the two following sentences:”If it is God’s work, it will be realised (Fr. Lievens),” and “We did not fail, it was God’s work (Fr. Hoffmann).” God’s work and human endeavour going hand in hand! From 1859 to 1969, 597 young men from Belgium/Holland joined the Bengal Mission: an average of more than 5 young men a year! Presently there are 369 Jesuits in the Ranchi Province of which 98% are tribals. Small wonder then, that the Christian tribals of Chotanagpur remain deeply grateful. When recently one tribal Father Walter stood in Moorslede (Belgium), the birthplace of Father Lievens, he spontaneously said: “Here I was born.” The rebirth of a people from oppression to a new freedom: externally and internally!

A Mission has not reached its full maturity till it has its own missions. Besides continuing the process of coming into its own as described above, it was during this period that tribal Jesuit missionaries from the Chotanagpur Mission went as missionaries into other territories: to the Assam mission in India itself. They went to take care, on the priority basis, of the neglected Adivasis working in the tea gardens. Besides being in a similar mission in the Andamans; they also went to help in Cambodia, Egypt and British Guyana. Missionaries from Chotanagpur teach and help in the Common Formation houses of the Society in India and in Rome. There is much scope for work in this new challenge. It is hoped that among the good number of new vocations with whom the Lord has presently blessed this Mission with, there will be many who would generously volunteer to be a missionary reaching out beyond the local confines of Chotanagpur.

2015: Now the Open Moment, the Challenges ahead

The present time of rapid changes, a time of discontinuity, brought about by the digital technology and the impact of the media has changed the very way in which we live and learn. This is felt in every sphere of life. It has affected our way of thinking and interaction with one another. It has left a huge impact in our mission.

Yet, the age old problems are still with us today. The divide between the rural and urban, the rich and the poor, remains very much the same. While agriculture remains the economic base for the people in the villages, no steps have been taken to bring about new practices in the agricultural sector. There is massive unemployment, both in rural and urban areas, leading to migration of young people, boys and girls, to the cities and turning them to many joining the Naxalite movements and unwittingly getting caught in trafficking. Land alienation with the development-induced displacement of people is still rampant especially as the government wants to promote large scale industrialisation of this mineral-rich region. The exploitative and nefarious link between politicians, police forces and unscrupulous business men is rooted very deep. History seems to repeat itself. The very low standard of education in government schools continues and as a result against all odds the demand on us for opening good schools continues. These challenges will seemingly remain with us for many more years to come. How we face these challenges, poses yet a worrying question.

Over the past fifteen decades the Jesuits of the Ranchi Province have successfully discerned, the content and method of their ministries. We have just celebrated the 200th anniversary of the Restoration of the Society of Jesus. We need to discern our ministries which will give outer and inner freedom to our people.